When Things Don’t Go Your Way 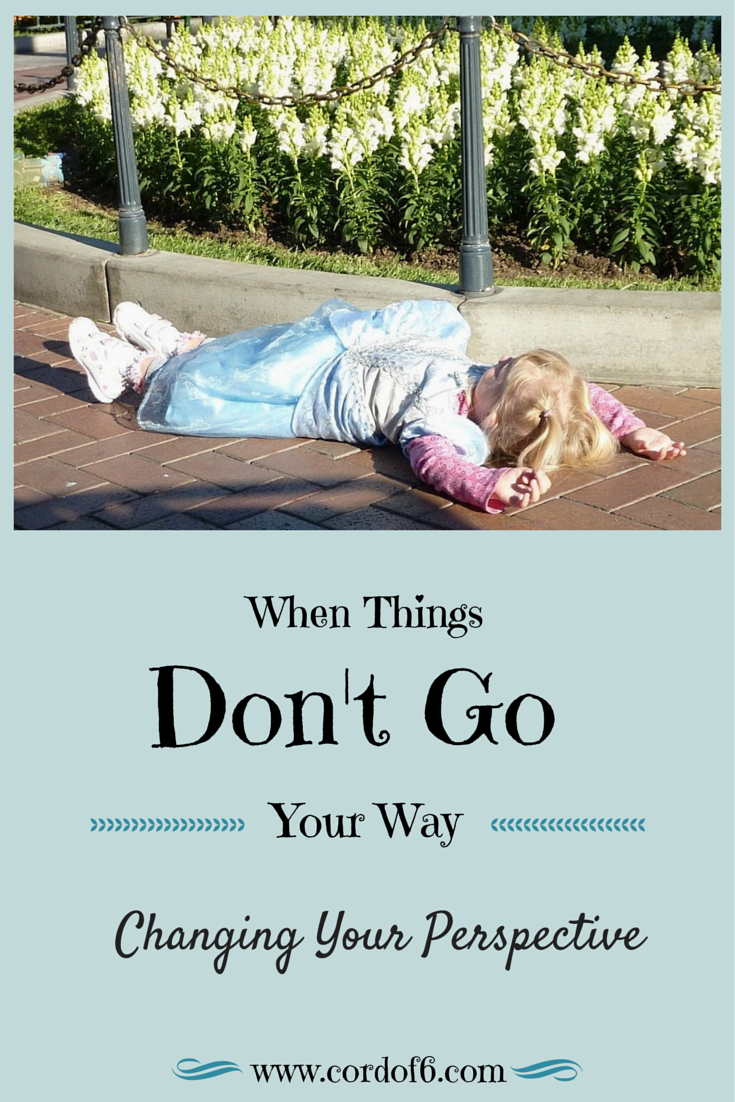 I couldn’t wait to see the smile on my three-year old’s face when she saw Disneyland for the first time.

She knew every song from all the videos Grandma had shown her in preparation.

We entered the magical gates through the security check. Then each adult in our large party decided at separate times to use the restroom.

Everyone wanted a group picture. Oh, the joy of trying to get a child to look at the camera when they don’t want to. There was no way she would budge a smile. Tears flowed as we tried to convince her that there were rides to go on and princesses to see.

We hurried over to the Peter Pan ride to give her a taste of real Disney magic. Next, we tried to convince her (and ourselves) that standing in a 55-minute line was worth being able to fly over London to Neverland for three minutes.

You know, I don’t blame her. Her first hours of Disneyland were nothing like she expected or like we talked them up to be. Anything that involves waiting is torture for a three-year-old that craves instant gratification.

At the end of the day, pure exhaustion hit.

The limbs collapsed in a walking strike as she settled on the ground in the middle of the happiest place on earth.

Who are we kidding? Who hasn’t wanted to throw the towel in for the day and call it quits? I know I have.

I look forward to my yearly anniversary B&B trip with childlike anticipation. It’s the only time my husband and I spend time alone. There are 4 schedules to juggle in order to arrange childcare.

My bags were packed, just waiting for the next morning.

I tucked my children into bed.

I looked at her head but didn’t see anything. Then I saw little brown specks by her hairline.

“Were you playing in the mud today? It looks like there are specks of mud on your face.” The specks were almost the same color as her hair.

As I inspected closer and searched underneath her mounds of thick locks I gasped in fear, disgust and disappointment as I saw a live bug move quickly through her hair. And then another… and another…

So instead of tucking kids into bed and dreaming of relaxing in a spa with my husband, I corralled all the kids in the car and headed to Walgreens. Poor Maille was crying in fear as I tried to calm her and reassure her that we were going to get every single bug off of her head (though secretly, I was terrified to get anywhere near the critters). I stayed up until 2 am shampooing heads and combing out every single nit until there were none. I was in tears as I called my mom to tell her that we couldn’t go on our trip.

Last month my dryer broke and I learned what it is like to hang dry clothes and dry myself with towels as stiff as cardboard. This month my dishwasher threw a fit and decided it was done washing dishes.

Yesterday we stood in line for an hour for the opening of Jurassic World. We got great seats, even though the theater was packed. Then the fire alarm went off. Twice. Everyone was evacuated. Thankfully, it was a false alarm. Just as we decided to leave, they opened the theater back up. But the seats were all taken.

Sometimes these minor inconveniences can seem like a big deal.

But you know what? After the initial disappointment and inner fit-throwing, things have a way of working out. These kinds of disappointments are never as bad as you anticipate they will be. You learn that standing in line is worth it once you are seeing your kid smile. That’s why you go back.

I learned that I was a fierce bug killer. I didn’t know I had it in me. Those critters were NOT going to invade my kid’s hair and make her cry. And I was able to reschedule my anniversary trip.

It wasn’t so bad hanging clothes on a line in the backyard. And no tornado ever came. Now I have a new washer and dryer

I recruited helpers for the dishwashing. It went by pretty quick and it was kind of nice not to unload a dishwasher.

When my plans are thwarted I need to remember…that things are probably not as bad as I make them out to be. Click To Tweet

This too shall pass.

(This is an affiliate link)