Through My Father’s Eyes: Book Review

“When you read or hear that Billy Graham is dead, don’t you believe a word of it! I shall be more alive then than I am now, I will just have changed my address. I will have gone into the presence of God.” ~Billy Graham

I’ll never forget watching the Billing Graham crusades on television as a teen. I remember the choir singing Just as I Am, Without One Plea as multitudes of people left their stadium seats to go forward during Billy Graham’s invitation.

“Don’t delay. Don’t ignore God’s plea. Get up out of your seat and come to Christ. He is the one who is calling. He is the one pleading for your soul. He is drawing you near. You’re not coming to Billy Graham. I cannot save you. I am a sinner saved by the same grace that is offered to you. I am only the messenger. Come to Christ.”

In Through My Father’s Eyes, Franklin Graham shares the legacy and lessons he learned as he watched his father, Billy Graham, follow God’s calling in ministry. 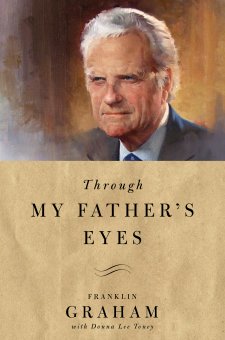 Billy Graham preached the gospel to millions of people around the world. He was a “friend to presidents, a counselor to world leaders and a confidant to royalty.” He loved his family and was a spiritual leader in his home.

In 1974, on Franklin Graham ’s twenty-second birthday, he went on a walk with his father that changed his life. Billy Graham sensed his son was struggling and encouraged him to make a decision to follow and obey the Lord or reject him. Several days later, Franklin accepted Jesus as his Lord and Savior.

“My father was a true Southern gentleman. When he was not in the pulpit, he spoke softly. His words were tender, gracious, and kind. In contrast, when he preached, his eyes snapped with passion and were fixed on one thing—the proclamation of the Gospel of the Lord Jesus Christ.”

One time Franklin asked his father the most important thing he could learn about preaching. Billy Graham told him to just preach.

“Be sure to always preach the Word. Read it, study it, memorize it. It will change your entire life. It is a ‘living’ book that works its way into your heart, mind and soul. Read it—then preach it.”

I enjoyed learning what it was like behind the scenes of Billy Graham’s ministry and home life. This book is a wonderful tribute and testimony of how Franklin Graham’s life and ministry was influenced by his father.

“Billy Graham was a loving father who taught his children values found in the Word of God and lived those values both privately and publicly. My parents left us children, a tangible legacy, but more valuable was the heritage they left in how they lived their lives.”

I was given a free copy of this book by BooklookBloggers in exchange for my honest review.